Leave Us a Review >>

Engagement Rings Over the Decades 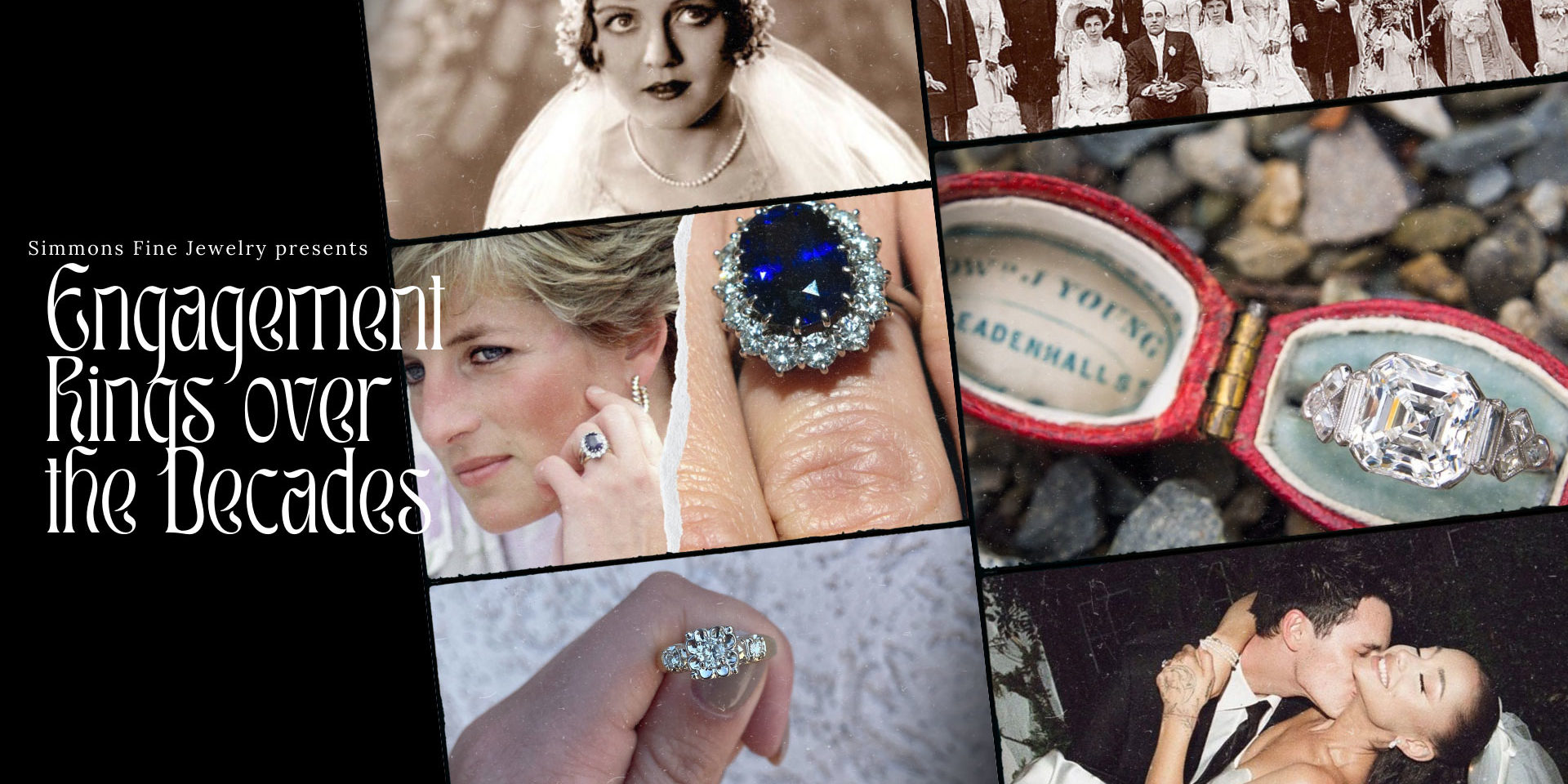 At Simmons Fine Jewelry we believe that the most important piece of jewelry a person can own is one that tells a story. A piece that celebrates the best moments in time, forever. An engagement ring is one item of jewelry you’ll wear for the rest of your life. Such an important token should perfectly represent you and your unique love story. With thousands of styles and choices when it comes to cut, shape, style, metal, and color, it is no wonder that engagement ring trends have varied so greatly over the years. Let’s take a peek back in history and look at the many trends to see which decade’s signature style speaks most to you.

Engagement rings are one of the most common symbols of love known today. Their symbolism can be dated all the way back to 1000 B.C. where it is believed that ancient Egyptians were given rings to signify their joining of the royal family. Later, in 500 B.C. the traditional idea of an engagement ring came to be in ancient Rome where it is said that a man would gift his wife an iron ring, often with keys attached to them to symbolize ownership. Romans placed these iron rings on their wives fourth finger on their left hand as they believed that the vein in that finger was directly connected to the heart, sparking a tradition still used in most Western cultures today.

The diamond engagement ring that we now know and love began in the late 1440’s when Archduke Maximillian of Austria commissioned a ring made of gold and a diamond for his betrothed, Mary of Burgund. The creation of this ring began to influence those of higher social class and of significant wealth to give diamond rings to their loved ones. For many centuries only those of high social class had access to diamonds until 1867 when diamonds were found in South Africa. In 1873 the DeBeers Mining Company was founded making diamonds available to more jewelers and sparking the many designs and trends we see today.

The 1920s brought a new era of fashion and art often known today as art deco.

Around this time diamond mining began to increase with DaBeers expansion causing diamonds to become more readily available to the public. When the art deco style emerged, it brought with it a combination of diamonds and angled lines centered around one large stone. Ascher cut diamonds were one of the most popular styles in the 1920s. Invented in 1902 by the Ascher family, the cut is similar to an emerald cut, but is wider set and features larger step facets to make the diamond appear larger and more brilliant.

The art deco style remained popular into the late 1920s until the start of the Great Depression. During the Depression the blingy rings were reserved for the extremely wealthy while most Americans opted for more cost-effective options. During the 1930s ring styles were simplified, and it became more common to see one small stone and soft designs in the platinum bands. Settings also shifted from having multiple stones to a single stone setting with 4 prongs “frame corners,” to help highlight the brilliance of the smaller stones.

During World War II, platinum was reserved solely for military use, therefore yellow gold reemerged as the popular metal for engagement settings. In 1947 the De Beers came out with a new marketing campaign with the now classic slogan “A Diamond is Forever,” causing a spur in diamond sales within the US. The round diamond became the front runner for the engagement ring centerpiece however the soft lace and floral metal designs remained into the late 1940s. Around this time the cushion cut also became a more popular option from the mid to late 1940s.

During the 1950s we began to see the reemergence of platinum engagement rings and the metal once again became available. The public also began to take interest in Jacqueline Kennedy. Her engagement ring from John F. Kennedy had a huge influence on engagement ring trends, introducing both colored stones and emerald cuts into the industry. The fashion world took a particular interest in emerald cut diamonds and they quickly became all the rage in the mid to late 1950s. In 1956 celebrity Elizabeth Taylor’s third husband, Mike Todd, presented her with a 29.4 carat emerald cut engagement ring reaffirming the popularity of the newest cut.

Yellow gold once again became the metal of choice in the 1970s. During the early 70s the popularity of channel set diamonds, or diamonds set in a specifically cut channel (rather than prongs) became extremely popular. Many of the engagement rings during this time consisted of elaborate channels set around one large center stone. As individuals began taking a more personalized approach to their rings, it also became more common for a bride and groom to design matching wedding sets.

The 1980s was all about excess as dramatic fashion trends took center stage. In 1982 Princess Diana picked out a sapphire and diamond cluster ring causing a huge surge in colored stone engagement rings that is still resonating with many today. Yellow gold with large round stones and intricate designs also remained extremely popular during this time.

Both yellow gold and cooler metals like platinum and white gold were popular during the 1990s. The marquise cut had a major moment in the late ’90s, when Victoria Beckham revealed her ring from fiancé David Beckham. The popularity of the marquise cut remained into the early 2000s.

The new millennium brought a need for extra sparkle making the halo a very popular style in the 2000s. The halo styles of the 2000s often featured a platinum or white gold setting with a radiant or cushion cut diamond surrounded by a “halo” of pavé diamonds causing the center stone to look larger while also adding a little extra dose of bling.

Today, stackable bands paired with a simple solitaire seem to be all the rage. Mismatched metal rings including white gold, yellow gold, and platinum are being paired together for gorgeous unique sets. The most popular shapes seem to be large, elongated oval and emerald cuts on simple solitaire bands. We are also seeing a surge in unique gemstones being added to simpler settings such as Ariana Grande’s oval shaped diamond set at an angle with a pearl placed alongside. These unique pairings are creating an era in which the saying “anything goes” stands true.

No matter what engagement trend speaks to you and your love story, you can be confident that Simmons Fine Jewelry has exactly what you’re looking for. With over 30 years of experience our staff and dedicated jewelers will work tirelessly to find, or custom create the perfect symbol to represent your love story. Visit us today where Idaho gets engaged, 1220 N Olive Ave, Meridian, ID 83642.

This website uses cookies to improve your experience while you navigate through the website. Out of these, the cookies that are categorized as necessary are stored on your browser as they are essential for the working of basic functionalities of the website. We also use third-party cookies that help us analyze and understand how you use this website. These cookies will be stored in your browser only with your consent. You also have the option to opt-out of these cookies. But opting out of some of these cookies may affect your browsing experience.
Necessary Always Enabled
Necessary cookies are absolutely essential for the website to function properly. This category only includes cookies that ensures basic functionalities and security features of the website. These cookies do not store any personal information.
Non-necessary
Any cookies that may not be particularly necessary for the website to function and is used specifically to collect user personal data via analytics, ads, other embedded contents are termed as non-necessary cookies. It is mandatory to procure user consent prior to running these cookies on your website.
SAVE & ACCEPT